The Consumer Advisory Council (CAC) is a group of community representatives who are working with our health service to improve the care provided to our patients, families and communities. The CAC ensures that the Townsville Hospital and Health Board hears directly from, and works in partnership with, local consumers and community members and health service partners, across our catchment area.

Our purpose is to provide an independent voice that promotes, protects and partners with the Townsville Hospital and Health Service to provide safe, quality and timely healthcare.

Virginia is a long-term customer service professional and the recipient of Customer Service Manager of the Year at both state (Queensland) and national levels. The award is bestowed by the Customer Service Institute of Australia. Virginia is a passionate advocate for bringing the voice of the customer into business.

She has implemented customer surveys and feedback processes, as well as employee engagement surveys which ‘take the pulse’ of an organisation from a customer and employee perspective.

Virginia’s interest in the healthcare sector was piqued by personal impact after her mother had a severe stroke. She cared for her mother and navigated the world of aged care as a result. Additionally, her grandson was born with multiple health issues and she has supported his development and engagement with the health services provided by Townsville University Hospital.

Virginia is a graduate of Monash University with a Master’s in Business Administration. The focus of her studies was on bringing about change in large organisations.

Graham joined the Queensland Police Academy as a cadet in 1975 and was inducted as a police officer in 1978. He served most of his police career in north and north-west Queensland and in 2013 he was awarded the prestigious Australian Police Medal in the Australia Day Honours.

Graham was a career police officer who held the position of Senior Sergeant, Officer-in-Charge, in Charters Towers from 2001, formally retiring from the service in August 2019.

Graham was elected to the Charters Towers Regional Council in 2016 and is currently serving his second term after being re-elected in the March 2020 local government elections. He has been a member of the Charters Towers District Community Advisory Network since its inception and represents that group on the CAC.

Graham and his wife, Meryl, have been married since 1981 and have two adult children and two grandchildren. In his spare time, Graham enjoys fishing, camping, gardening and spending time with his family.

Kaylee is passionate about assisting her local community improve healthcare services in the region and optimise access to the necessary resources. She has a Doctor of Philosophy (majoring in Employment Relations, Transaction Cost Economics and Neo-Classical Economic Value) and is serving her first term as a Councillor of the Burdekin Shire Council.

Kaylee has held various roles over the years, currently serving as a Councillor of the Burdekin Shire and council-appointed Director of Lower Burdekin Water and Committee Member of Burdekin Shire Rivers Improvement Trust. In part, her knowledge and experience stems from her roles as Director of the Nu-Tank group of companies (2008-2016), a lecturer and sessional academic at James Cook University (2017-2019), a Contributing Author for Palgrave Macmillan (2019-present) and undertaking all administrative tasks for her sugar cane farm.

Kaylee is married with four children. She is honoured to have the opportunity to engage with the Townsville HHS to assist in improving the health and wellbeing of her local community.

As a long-term resident of Townsville, Kylie has a genuine commitment to the region. Having the opportunity to raise a family, with her husband, in a safe and healthy environment and fostering positive community connections was one of Kylie’s reasons for joining the CAC.

Kylie has first-hand experience as a health consumer after being diagnosed with breast cancer in 2015. Through this experience, she understands the impact a significant medical diagnosis has on a person and their family, and the need for high-quality, expert support delivered close to home. Through her membership on the CAC, Kylie hopes to influence local healthcare to ensure it is focused on the needs of both the patient as well as family/carers.

Kylie is a finance professional working within large government and not-for-profit organisations and it’s important for her, personally and professionally, to contribute to an inclusive and respectful community.

Niki’s family operates a cattle-grazing property 60 kilometres north west of Hughenden. Health and wellbeing are important to Niki and she is a personal trainer and fitness trainer in Hughenden instructing fitness, thump boxing and yoga classes since 2014.

The Hughenden Community Advisory Network (CAN) is part of Niki’s portfolio as a newly elected councillor for the Flinders Shire Community.  In her role on the CAN and as a representative for Hughenden on the CAC, Niki endeavours to bridge some of the gaps and help support the Townsville Hospital and Health Service with healthcare services to outback towns.

Peter is the Chair of the Ingham Community Advisory Network and represents this group at the Consumer Advisory Council. Peter is a former maths and science teacher who began work at Ingham State High School 1972, planning to give Ingham one year.

He re-trained as a teacher librarian and retired (while still in Ingham) at the turn of the century. Peter is a strong supporter of fieldwork as an education tool in both day and longer-time formats for students of biology and geography.

Peter has served as a representative for Hinchinbrook teachers to the Queensland Teachers’ Union Council, becoming a trustee and later a life member. He is a former Chair of the Ingham Blue Nursing Service, was awarded life membership of the Ingham State High School Parents’ and Citizens’ Association and is active in the community through the Uniting Church and environmental groups. Peter is, at all times, supported by his wife of 52 years, Pam.

Chris is an occupational therapist who believes that ‘making small, simple changes can have huge positive impacts on health’. She began working in health and well-being teaching aerobics in the 80’s.

As a consumer, health professional, daughter and mother, Chris has lived experience of the health service and joined the CAC to learn more and to contribute to simplicity and responsiveness in health care delivery.

Chris loves cooking creatively. This has been useful with a child with anaphylaxis. She has an obsession with containers, especially glass vegemite jars. Camping with family and friends with fabulous food away from everything by a creek is her happy place.

Movement and activity still feature in her personal and professional life and are inspired by natural movement and the Feldenkrais method. 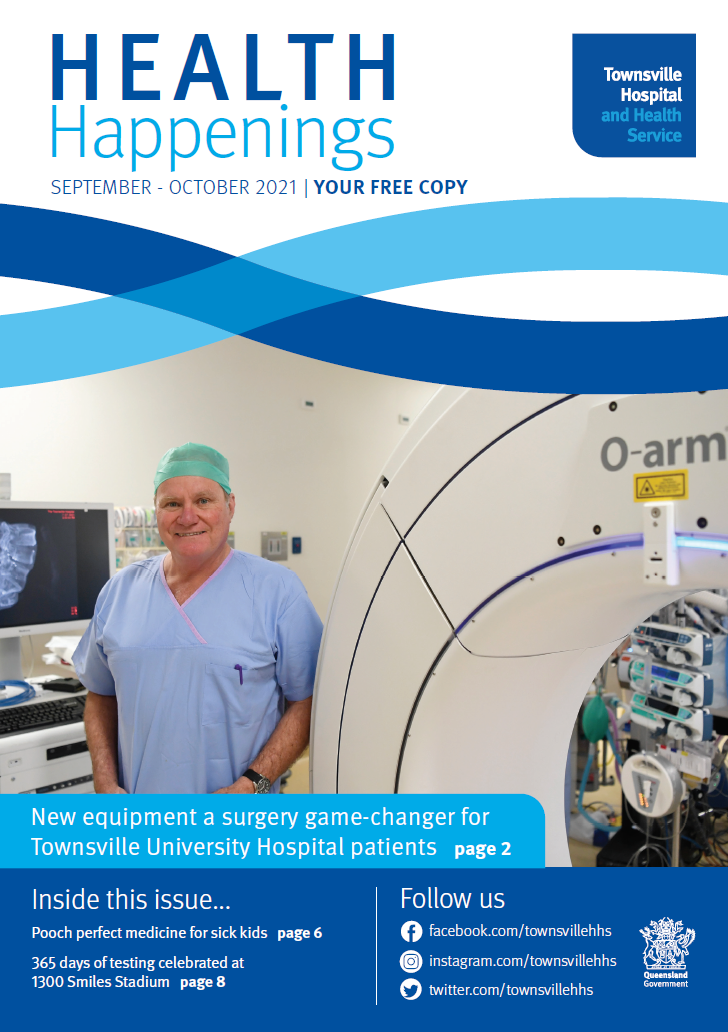