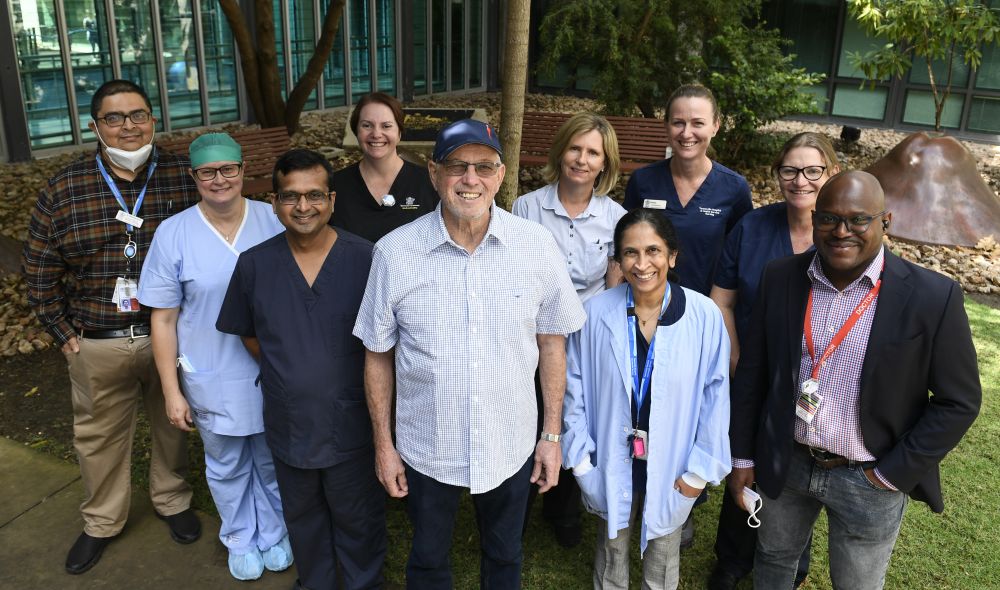 A Townsville grandfather has become the first North Queensland recipient of a rarely performed treatment for inoperable liver cancer.

Selective Internal Radiation Therapy (SIRT) involves making a small incision in the groin, then inserting a catheter into the artery.

Millions of tiny radioactive beads are then delivered directly to the liver to destroy the cancerous cells.

Until recently, the procedure wasn’t available outside of Brisbane, forcing eligible patients to make the trip south.

Having already battled the disease for two years, Russell Norton said he wouldn’t have been physically able to travel to Brisbane for the treatment.

“Making that trip not once, but four or five times in the leadup to the procedure, probably would have been too much for me after everything I’d been through,” Mr Norton said.

The grandfather of 14 was first diagnosed with bowel cancer in 2019.

He underwent surgery at Townsville University Hospital, before going through several bouts of chemotherapy.

When it became clear chemo was no longer effective, medical oncologist Dr Zulfiquer Otty advocated for Mr Norton to become the first person to receive SIRT at Townsville University Hospital.

“Dr Otty is amazing; he always tries to find a new approach to fighting my cancer, which gives me that ray of hope that I’ll get more time with my family,” Mr Norton said.

‘‘I was overwhelmed with gratitude when I discovered I was going to be the first person in the region to undergo the procedure.

“So many amazing people did a lot of work to make this happen, and I think it will give some hope to others in this part of the world who are in the same boat as myself.’’

Townsville University Hospital clinical director of radiology Dr Shiromi Prematunga said bringing the SIRT service to Townsville was a monumental team effort, that was years in the making.

“There were so many enthusiastic doctors, technologists and support staff who came together to make this possible,” Dr Prematunga said.

“We’re also grateful to the interventional radiology team from the Royal Brisbane and Women’s Hospital, who supported and mentored our local teams.”

‘‘The radiation beads used in the treatment need to be specifically created for each individual patient in Singapore,’’ Dr Deepak said.

“It’s fantastic we can now offer this service here for patients who are at a stage where they have no options left.”

Mr Norton said getting the procedure done was definitely effective in targeting the tumour in his liver.

“Unfortunately, my cancer had spread to other parts of my body, but I’m someone who’ll always try and focus on the positives.

“I’m not going to let this thing dictate what I can and can’t do.

“The brilliant doctors here are always looking for new ways of treating my cancer; their positivity always gives me a lift when I need it most.”