Hospital interpreter’s journey inspires her to help others 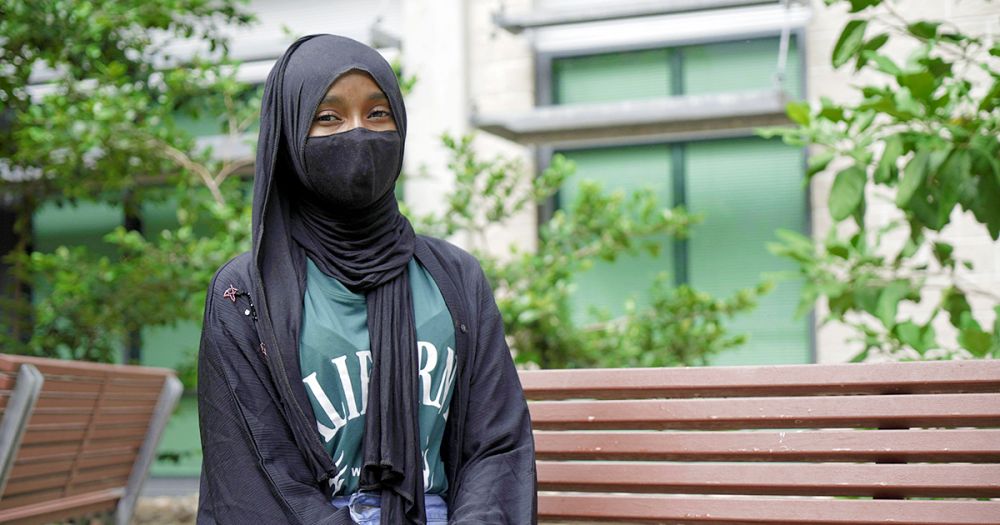 When Samhoun Ibrahim arrived in Townsville from central Africa three years ago she did not speak any English.

Now, the aspiring banker is helping Townsville Hospital and Health Service (HHS) provide culturally appropriate care to other migrants through her translation of a rare dialect which is spoken by less than 500,000 people in the war-torn Central Africa Republic.

Samhoun is one of just a handful of qualified Sango interpreters working across the world and is contracted through Translationz to support Townsville HHS provide the best treatment to people
who speak the language.

With her family leaving the Central African Republic because of the civil war, Samhoun said her family migrated to Chad where they lived in a camp for six years before coming to Australia in 2019.

“For the first month it was very difficult I didn’t know any English. I only knew ‘what is your name’ and ‘hi’,” she said.

“Someone would come to our home and teach us how to take the bus, how to go to the hospital, how to make an appointment.

“Here (in Australia) it is very good. We have already forgotten everything that happened to us in the camp.”

She studied English before starting her university studies in Australia and this was when she decided to use her knowledge to help others.

Samhoun is now studying a diploma of higher education at James Cook University with the goal of getting her degree in banking.

In between her studies, Samhoun translates appointments for Townsville HHS patients who speak Sango.

“After three or four months in Australia I started volunteering and then I became a support worker at the Townsville Multicultural Support Group and from there I began working with the translating and interpreting service in 2021,” she said.

“I thought that if I became an interpreter, I could help those who don’t speak English either.”

“Sometimes it is two times a month or two times a week. When they need me, they send me the request,” she said.

Interpreter services coordinator Susan Edwards said translation services gave patients the opportunity to fully participate in their care by not only helping them understand a clinician but helping the clinician understand them.

“That language barrier creates obstacles and removing it is so impactful to someone’s health care journey,” she said.

“I first realised how powerful it was having a translator when I helped facilitate an appointment where I literally saw the person sit up and grow three inches because they heard their language.

“You could see they had so much to say.”

When Ms Edwards stepped into her role three years ago, she said Townsville HHS could not consistently offer a Sango-to-English translation service due to the shortage of interpreters available.

“A large hospital like TUH is foreign to some patients and it is overwhelming when they don’t understand what clinicians are saying and can’t explain what is wrong with them,” she said.

“It is important to create an environment where patients understand their care enough to ask informed questions.”

With this in mind, Ms Edwards made a plan to ensure language was not a barrier for a large group of migrants who settled in Townsville from the Central African Republic.

“We didn’t know what to do so we thought outside the square and we ended up with a translator who was located in France,” she said.

“He was a great resource even though he lived thousands of kilometres away in a different country.

‘‘Now we have Samhoun here in Townsville and we are so grateful to have her.’’

The health service also offers translation services for more than 200 languages and dialects, including AUSLAN and Sango, 24 hours a day, at no charge to the patient.